Evaluation and clinical validation of Dem@Care’s solution will be realized in three stages in synchronization with the three releases of the integrated systems prototypes. Pilots will take place in three countries: France, Sweden and Ireland and in three different environments: 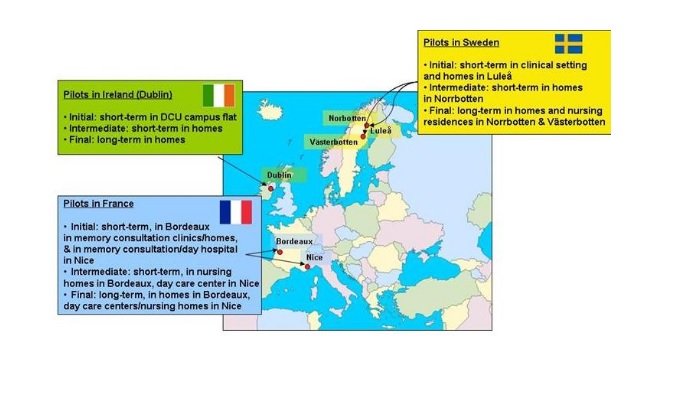 Lab based: @Lab pilot The Lab-based pilot is going to be used as a reference site to test Dem@Care technologies and to acquire clinical knowledge about the behaviour of dementia patients and interaction with Information Communication Technologies (ICT). The acquired expertise will be used to drive deployment of ICT solutions in terms usability, functionality and reliability in the Nursing-Home and Home pilots. The three themes of enablement, diagnosis and safety permeate the three protocols. The labbased research is primarily concerned with diagnoses.

Special cases: May be included: Subjects with no schooling aged from 50 to 79 years with MMSE> 22/30, and for over 80 years MMSE> 21/30 (standards  of Kalafat, 2003) (Folstein et al. 1975), or arguments in favor of the following diagnosis: probable Alzheimer’s disease according to the criteria of the NINCDS-ADRDA and / or major depressive episode according to DSM-IV-R;

For the nursing home, functionality will be limited to the exercise, mood and sleep domains for Phase 1 since in this environment these are seen to be the prioritised domains. For this environment, personalisation is less fundamental than for the home-based deployment, since the enabling, person-centred approach is more appropriate for use in older adults with early stage dementia. For later stage dementia such as individuals in a nursing home, it is likely that more care decisions will lay in the hands of the clinician.

The researchers are based at the campus of Luleå University of Technology and the County Council of Norrbotten in Luleå, Sweden.

The participants are residents of Nursing homes and will be recruited consecutively through the time frame of the project and the three test periods. At the test of the first pilot device the number of participants will only be 4-5 people with dementia and the test will only be performed in Luleå for a time period of 3-4 days for each person. When the be Dem@Care device has matured and all important functionalities are in place more participants will be included in the tests both in Luleå, Sweden and in Nice, France. The participants should have a diagnosis of dementia, be residents of a nursing home, and have indication of Behavioral and Psychological symptoms of Dementia (BPSD). Over the whole time period of the project it is estimated that in all about 50 people with dementia will have tested the Dem@Care device for a time period of three months for each participant.

The @Nursing home evaluation will have collaboration with Geriatricians at both the Sunderby Hospital in Luleå  and the CHU in Nice in the evaluation process.

The Home based pilot is primarily concerned with the theme of enablement. Within enablement, there are 5 functional domains, as defined in deliverable D2.2: Functional Requirements and Scenarios v1; Sleep, Exercise/Physical Activity, Activities of Daily Life(ADL/IADL) and Mood. These five areas will be investigated in the final versions of both the home and nursing home deployments.

The researchers are based at the Dublin City University campus, in North County Dublin, Ireland. The participants are based in the surrounding Dublin area.

The @Home pilot in Dublin site will engage directly with “lead user” participants in order to facilitate a rolling iterative design process and expedite the final design of a workable prototype.. The Dem@Care @Home pilot will take place in the private homes of the lead users, who will be older adults with dementia, and their caregivers. Systems will be deployed to participants’ homes on a rolling basis until all participants are engaged with the Dem@Care system, for as long duration as the participants are happy to engage. All participants will be recruited via the Memory Works clinic at DCU.

The aims of the @Home pilot are to answer the following research questions;

Collaboration will be with Memory Works Clinic at DCU and Alzheimer’s Cafe initiative but participants are not recruited through any hospital institution as they are not necessarily under the care of a hospital consultant or service.

The recruitment of people with dementia to participate in the pilot studies will be handled appropriately in Dem@Care, so as to ensure the fully informed consent of the participants, in line with European and National legislations